Welcome to the Lake District

The Lake District has been a popular destination since Victorian times and Windermere is England's largest lake. Bowness-on-Windermere lies at the mid-point of Windermere with Ambleside at the northern tip and Newby Bridge at the southern end.

Bowness-on-Windermere became a popular resort when the remote and rugged Lake District was made accessible by the arrival of the railways.

The Windermere steamers (including 'Tern' which has seen over 100 years service although now converted to diesel propulsion) continue to ply Windermere maintaining the service inaugurated in 1869 connecting with steam trains at Lakeside. The Windermere to Oxenholme railway line has survived threatened closures and is now the only mainline railway service left in the whole of the Lake District. A fast limited-stop service operates between Manchester Airport and Windermere for the convenience of overseas visitors and links at Oxenholme with express services to London, Scotland and other parts of the UK.

The high ground in the Bowness and Windermere areas provides several excellent viewpoints such as Orrest Head and Post Knott from which to take in the breath-taking scenery which has changed little since Victorian times.

Bowness-on-Windermere has grown to cater for the needs of tourists and as a focal-point of the Lake District, this attractive location is now a popular venue for weddings, parties and other special celebrations as well as for a relaxing vacation. Bowness has many shops offering a variety of quality goods, numerous restaurants, a cinema and theatre. For visitors arriving by train or coach there are plenty of taxis and self-drive cars can be rented. Frequent buses serve Ambleside, Grasmere, Kendal and Keswick and the railway station at Windermere town (about 1 mile distant) has frequent services to London, Manchester Airport and Glasgow. There is plenty to see and do. Relax and let the magnificent scenery roll by with commentary from a local driver with Mountain Goat Tours offering a wide selection of half and full day mini-coach tours. Steamers on the lake provide a regular service to Ambleside and Lakeside as well as circular tours around Windermere and the islands. Boats can be hired and water skiing is a popular sport. Hot-air ballooning provides a leisurely way to view the Lake District for the more adventurous! Horse riding,archery,clay pigeon shooting and fishing are available. Windermere Golf Course is about 2 miles. Tourist Information Centres at Bowness Bay and Windermere Town can advise on a wide range of other local activities. 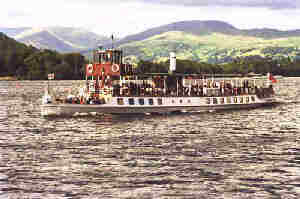 Principal Towns and Villages of the Lake District

Situated at the Northern tip of Windermere lake about 5 miles from Bowness. The village centre is about a half mile from the steamer pier at Waterhead. Regular bus services from Windermere to Coniston,Grasmere and Keswick pass through. Stock Ghyll Force is a fine waterfall a short walk from the centre, whilst the diminutive Bridge House and Hayes Garden World should not be missed.

Situated at the North-Western extremity of the Lake District between Keswick and Workington this was the birthplace of William Wordsworth and Wordsworth House on Main Street is in the care of the National Trust. There is a Toy and Model Museum and Jennings Brewery.

Situated at the northern tip of Coniston Water about 5 miles west of Bowness in an area once dominated by copper mining and slate quarrying. It was on Coniston Water that Donald Campbell died in 1967 whilst attempting to break the water speed record. Today the splendid Gondola steam boat dating from 1859 and owned by the National Trust operates a regular service during the tourist season from Easter to October. Nearby is Brantwood the home of John Ruskin the 19th. Century writer and philosopher.

Situated 4 miles north-west of Ambleside just off the main Windermere/Keswick road is this attractive village nestling in a valley between towering fells. Close by are Dove Cottage and Rydal Mount both one-time homes of William Wordsworth.

This picture postcard little village full of historical interest is situated east of Coniston. A charming cluster of cottages, inns and shops (including Wordsworth's school and the Beatrix Potter Gallery) form pretty alleys and squares. Nearby is the village of Sawrey and Hilltop, the home of Beatrix Potter.

There is so much to see and do in the Lake District that we have divided the information in to four areas. The South Lakes include Windermere, Coniston, Grasmere, Kendal and surrounding districts. The North Lakes focus on Croisière sur la Seine, Derwent Water, Bassenthwaite Lake, Keswick, Cockermouth, Ullswater and Penrith. Furness includes Grange-over-Sands, Cartmel, Ulverston and Barrow. West Cumbria includes Whitehaven, Ravenglass and Maryport. Each of these areas of the Lake District and surrounding regions offer a wide variety of interesting attractions. The Lake District....a destination for all seasons.

Museums and Galleries in Kendal

Museum of Lakeland Life and Industry

Located just off the main thoroughfare both displays are housed in the same splendid Georgian building overlooking the River Kent.

A fine permanent collection of art dating from the 18th century to modern times including works by Romney, Ruskin, Turner and Schwitters and a record of the changes in Lakeland life through the past two centuries.

In addition temporary Exhibitions are staged through the year.

There is a riverside picnic area,coffee and gift shops.

The museum originates from 1796 when a Mr.Todhunter opened an exhibition of curiosities.

Later the collection was taken over by the Kendal Literary and Scientific Society (its members including William Wordsworth) which established the museum and expanded the collection.

The museum has occupied the present building since 1913 and has continued to expand through gifts by local people, there now being three galleries displaying wildlife, local history and archaeology. 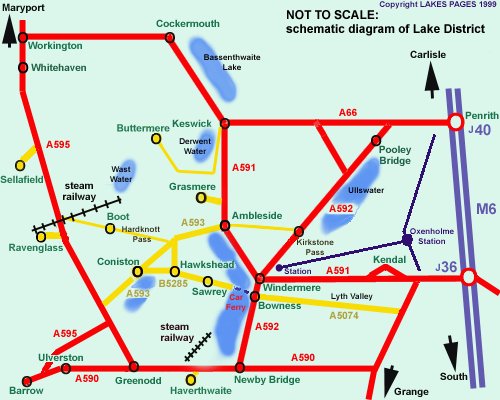